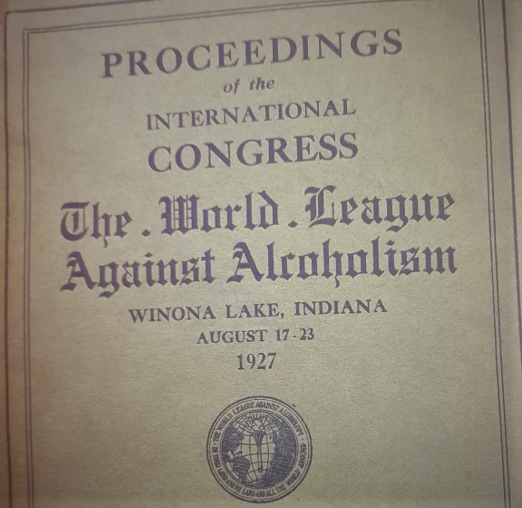 In July 2021, Jamie Banks and I gave a joint conference presentation at the ‘Intoxicating Spaces: Global and Comparative Perspectives‘ Conference, hosted virtually by the University of Sheffield. This was based on our work-in-progress research on how international anti-alcohol congresses served as spaces for the global exchange of ideas about alcohol, race and racial difference in the late 19th and early 20th centuries. We’re delighted a little nervous to share the recorded conference presentation with you all, just because it’s still a little weird to have such things recorded, even though we’ve all been video recording ourselves a lot over the last couple of years. Anyway, here it is!

The first major international anti-alcohol conference, the Antwerp Meeting against the Abuse of Alcoholic Beverages, took place in 1885 and twenty-one further conferences took place by 1939. These meetings were attended not only by official representatives of government bodies and temperance organisations, but also by researchers from a variety of disciplines and independent delegates. Conference proceedings, including agendas, delegate lists, papers presented and minuted discussions, provide a range of contemporary perspectives on how alcohol was thought to affect individuals, social groups, and entire nations.

For this paper we concentrated on how the congresses were spaces in which attendees from around the globe came to share, consolidate, and disseminate ideas about the degenerative influence of alcohol and alcoholism on people from different ethnic groups in colonial, settler colonial and non-colonial parts of the world. In doing so, we discussed how these global discussions about alcohol contributed to the ongoing development of ideas about race and racial difference, which were in turn shaped by broader concerns about colonialism, social inequalities, and competing assertions of modern ‘nationhood.’ Finally, we raised some preliminary thoughts about how the Anti-Alcohol Congresses might allow us to trace the dissemination of ideas about race back into national contexts, as well as their entwining with trans-national debates about anti-alcohol activism, anti-slavery groups and other ostensibly humanitarian campaigns.

The ‘Intoxicating Spaces‘ Conference had an incredible range of papers on alcohol history, as well as other intoxicants such as opium, ecstasy, cannabis, coffee, and tobacco, and themes such as material culture, discourse, regulation and authority, mobility and circulation. It was part of the ongoing major research project ‘Intoxicating Spaces: The Impact of New Intoxicants on Urban Spaces in Europe, 1600-1850’, which examines how a variety of intoxicants – cocoa, coffee, opium, sugar, tea and tobacco in particular – formed part of what the researchers call a ‘psychoactive revolution’ in the modern world. The project concentrates on transformations in the cities of Amsterdam, Hamburg, London and Stockholm, and they have a fabulous website, with lots of resources. Go check it out!